The Full UFC Fight Night: Anthony Smith vs. Glover Teixeira Line-Up is officially set for May 13, 2020.

In addition to the top UFC Light Heavyweights clashing in the main event at VyStar Veterans Memorial Arena in Jacksonville, Fla, Alexander Hernandez vs. Drew Dober, and Ray Borg vs. Ricky Simon are amongst the new match-ups added to the fight night card. 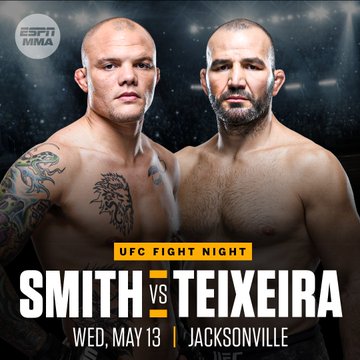 UFC president Dana White joined ESPN’s Brett Okamoto on Friday, where he confirmed that the May 13 UFC Fight Night will be headlined by a light heavyweight clash between Anthony Smith and Glover Teixeira. This fight was originally scheduled to headline the Fight Night event on April 25 in Lincoln, Nebraska, which was eventually canceled due to the pandemic.